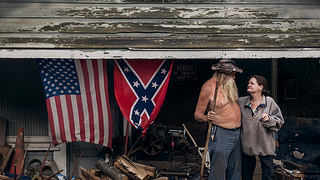 Kids nowadays think it’s cool to be a mountain man.  Look around and you’ll see an abundance of plaid and beards sported by and fawned over by a substantial amount of young people who have most likely jumped on the folk music bandwagon. Slightly more surprising, but perhaps not unrelated, is that young Southerners in the mountains appear to be embracing some of the Appalachian dialect features that were looked down on just a generation before.

Feeling that their home areas were underrepresented in the relative abundance of linguistic research on Appalachain speech (which is largely focused on West Virginia coal mining communities) linguists Daniel Hasty and Becky Childs have investigated what is going on with the speech of people living in South Central Appalachia – the mountains of North Carolina and Tennessee. It is well documented that “mountain talk” in West Virginia is associated with older generations and being country and is dying out among young people who want to embrace a more modern image. (Although this isn’t always the case. The stereotypical Southern way of saying “I” like “ah” is still going strong.)

Combining the results of a couple of different linguistic studies on rather different communities, Hasty and Childs found that, overall, younger people are getting back to their roots and reclaiming some Appalachian ways of talking. Results from Child’s study of Texana, a tiny African American community in the southwestern corner of NC, indicate that the younger speakers there are speaking less like urban African Americans in Charlotte or Atlanta, for example, unlike other rural African American communities in NC who embrace a more urban identity. The corollary of that is that they sound more like the local mountain variety, saying the “r”s on words like door, for example, where black speakers in cities tend to leave it off, pronouncing it like “do’.”

That’s more like it. The Avett Brothers at Merlefest, a growing annual bluegrass and roots music festival in the foothills of NC (photo courtesy of Merlefest via Flickr)

Hasty’s study from the Tri-Cities region of eastern Tennessee show that younger people use double modals – using two modal verbs, such as “might should,”used to could,” etc. –  and rate them as acceptable in speech.  The interesting thing about that is that their parents showed much less acceptability in using double modals, so the youngsters’ attitudes about this Appalachian dialect feature matches that of their grandparents.

Hasty’s data speaks to the change in attitudes about  grammar rather than use, which makes me think it might have something to do with formal education’s change of stance on teaching grammar. My parents’ generation waxes nostalgic about diagramming sentences, and I wouldn’t begin to know how. If it weren’t for foreign language instruction and a concerned mother, I would probably join the ranks of my peers who can’t tell you what a participle is, much less a modal verb and whether it can be doubled or not. All that to say, these kids may not even realize that double modals aren’t Standard English, while that was ingrained in their parents in school, no doubt contributing to the stigmatization of them.

The fact that a younger generation has decided to talk in ways that were once stigmatized seems to indicate that those dialect features  are simultaneously recognized as local and carry a new social meaning “stripped of any negative connotation” that isn’t at odds with other aspects of their identity (being urban and young; or being African American, in the case of Texana). Hasty points to the recent rise in folk rock, heavy in banjo and other string band instruments and undeniably influenced by mountain music (which was only recently considered incredibly backwoods – Deliverance, anyone?), as evidence, specifically mentioning my beloved Avett Brothers and another favorite, Old Crow Medicine Show.

NC’s unofficial anthem, embraced by college students across the state

I’m hesitant to agree in concluding that these communities are reclaiming specifically “Appalachain” identity, as double modals are a common of Southern speech in general, without regard to class, race, age, and rurality, and certainly not confined to the Appalachians (although many features that were once wide-spread throughout the South are far more robust in the mountains and rural areas today). In fact, being a young and urban Southerner myself who doesn’t have much of a noticeable Southern accent (as I’ve been told by fellow travelers who expect anyone from the South to sound like Paula Deen), I never realized double modals were a Thing that everyone didn’t do until grad school! It turns out I use them all the time, as does my mom who is undeniably Southern. I can’t imagine not using them, as they convey a tone of hesitation that couldn’t be expressed by just saying “might” or “could.”

Whether Appalachian or just general Southern, it seems that there is a new wave of acceptance by the new generation of local culture and heritage that was repressed  and stigmatized not too many years ago, echoing the rise of Southern accents in the media in dramatic rather than just comedic roles. Those who are concerned that American dialects are leveling out and losing their nuance might should reconsider.